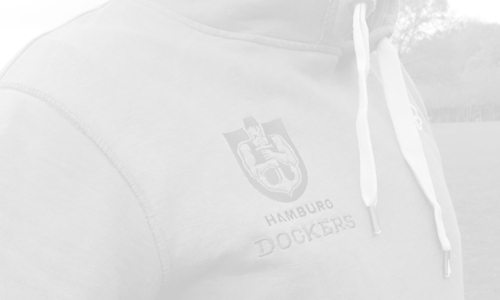 Pitch invasion, torrential rain, blinding sunshine and overdose: Hamburg’s away matchup against Berlin had it all. With their previous two ventures to Frankfurt and Stuttgart totalling a mammoth 24 autobahn hours, the three hours it should have taken the Dockers to arrive in Berlin promised road trip reprieve. With Doc Klomp behind the wheel those three hours were cut to two but ironically felt like many more. The occupants of Car Klomp emerged white-knuckled and visibly shaken and claims of vicious swerving and hard braking quickly followed. But with the life-threatening gamble that was Klompy’s driving came the luxury of time; the boys were able to settle their nerves and warm up properly ahead of what loomed another fierce challenge.

In stark contrast to the two sides’ last encounter it was Hamburg which drew first blood, which classy midfield extraction setting up three early unanswered majors – the first of which was kicked by newbie J O’Shea. D Sneddon and H Thring also appeared threatening up forward, more than making up for a cloudy S Gilbert. That cloud was brought on by an excess of ibuprofen: Gilbert had apparently pissed caution to the wind and gobbled down three 600mg pain-busting bombs to help him forget a sore back. 1800mg…it’s a lot. And it was made problematically worse given the prices at the service station during the club’s breakfast break. Protesting the extortionate prices of energy drinks, baked goods and coffee, Gilbert instead bought a banana. So with very little (other than pain relief) in a relatively cavernous stomach, Hamburg’s key forward found himself in a haze. The slack was picked up and held high; debutant Jack seamlessly slotted into the midfield, C Woodward was in and under as he normally is and F Naumann roamed Schilller Park like a potential League MVP.

Then the rain started.

With just 14 points in it at the main break and with S Gilbert still struggling to see the football Hamburg’s undefeated run looked in serious danger. To their credit the Crocs had stepped up their intensity and although Hamburg was able to match it for the most part, the side struggled to adapt to the instantly slippery conditions brought about by the afternoon monsoon. Handball strings and sales of candy that would have, in dry weather, featured in Sports Tonight’s Plays of the Day were reduced to comedy – Clarkson’s attempted bounce at half forward was a sight to behold.

The game was truely alive at three quarter time when the haze lifted: Gilbert was back.

He converted reliably on two seperate occasions early in the final term to extend Hamburg’s lead and when he calmly check-sided a third for the quarter, the Crocs’ jaws had been duck-taped shut tighter than if pre-Stingray Steve Irwin had done it himself. Play was momentarily interrupted when a cyclist followed a dirt track out onto Schiller Park and straight into the shoulder of “Rhino” Hennessy but the interruption didn’t halt Hamburg’s last quarter dominance. Evermann was simply unstoppable out of the midfield and when Thring snagged his fifth of the day it was clear the ball was too heavy to continue.

Hamburg now looks ahead to the final and thrilling chapter of the Hamburg Football League before hosting the Frankfurt Redbacks as the finals loom. 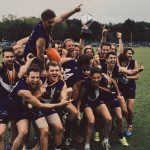